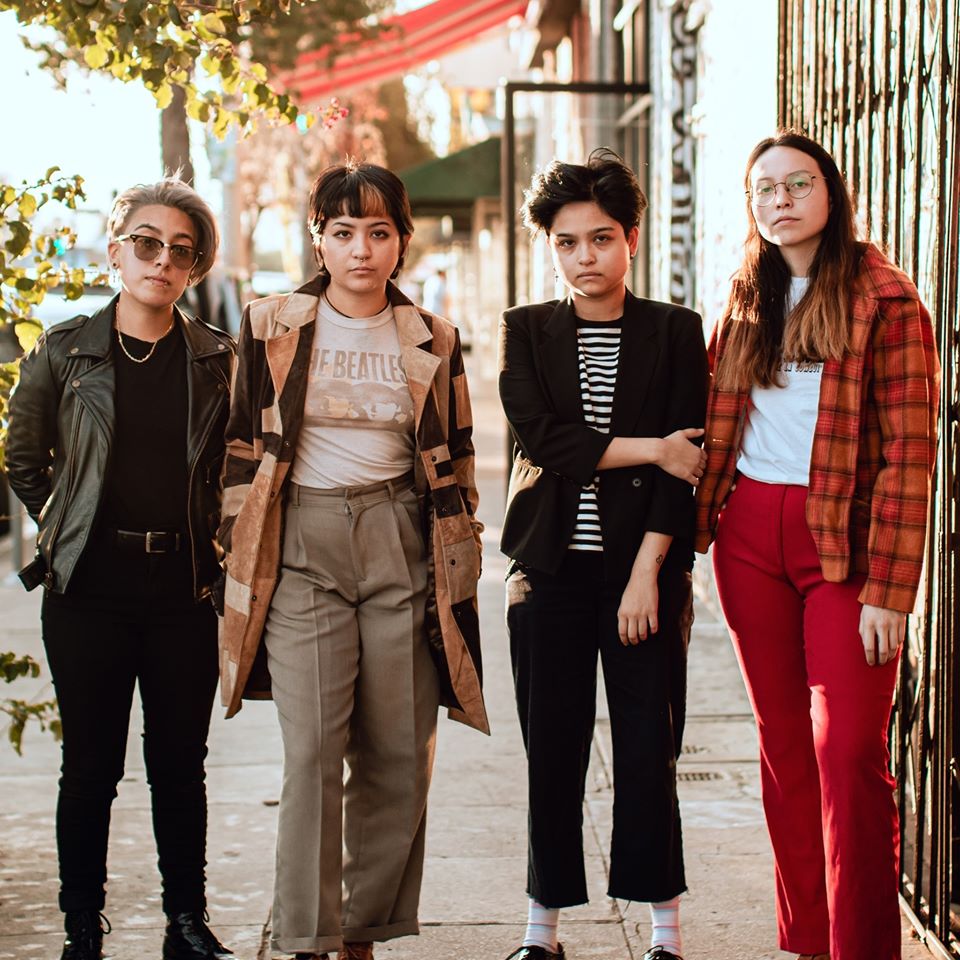 On their Epitaph debut Until My Lungs Are Cleared, Ariel View channel the most complex and messy emotions into 11 immaculately arranged indie-rock songs. Tapping into the kinetic energy they first revealed in playing backyard shows all around the Inland Empire, the Ontario, California-based band blends punk and surf-rock into a finespun sound that’s viscerally charged yet gracefully melodic. And in their lyrics, Ariel View share stories of drinking too much and missing the wrong people and dreaming of running thousands of miles away, with sisters Harmonie and Heaven delivering each of their lines with both raw sensitivity and defiant self-assurance.
Founded in 2014, Ariel View began as a two-piece featuring Harmonie and a former member who left the duo soon after they’d released their debut. “When that happened my dad told me I should have Heaven join,” Harmonie recalls. “She was only 12-years-old at the time and I was like, ‘I don’t want this kid in my band’—but then she started playing with us, and it was actually really good.” (Both lifelong musicians, the Martinez sisters have played in a number of cover bands with their father—including a Smiths cover band and a Beatles cover band—with Miranda and Nadine sometimes also joining those groups onstage.)
As they began playing more shows—and shaping a sonic identity largely inspired by alt-rock bands like The Strokes and The Growlers—Ariel View cycled through many guitarists and drummers, eventually bringing Nadine into the fold. “One of their former drummers is a coworker of mine,” says Nadine, who works at Sam Ash Music. “The band did a photo shoot and I thought they looked cool, so I got on Instagram and DM-ed them like, ‘Hey, can I be in your band?’” Within a week of hearing back, Nadine learned all of Ariel View’s songs and met with them for a jam session, then immediately joined as their drummer. Not long after that, they found their lead guitarist in Miranda, who played in a local band called MoonFuzz. After admiring her guitar skills for months on end, Heaven received an Instagram message from Miranda, asking if she wanted to get together and play. After a few jam sessions, Heaven asked Miranda to join the band. With their lineup solidified at last, Ariel View landed their deal with Epitaph soon after the release of Leo, and set to work on Until My Lungs Are Cleared at the start of 2018.
Over the years, Ariel View have gone from playing backyard parties to taking the stage at festivals like Top Acid Fest—where, at the 2018 festival, the band dealt with a bomb scare during their set. “There were a lot of skinhead punks that year, and somebody brought a fake grenade,” says Nadine. “The SWAT team showed up and there were helicopters everywhere, and Harm and I just looked at each other like, ‘Fuck it, let’s just play through it—if we die, we die.’ But we didn’t die, and it was great.”
As a queer-identified band, Ariel View are passionate about supporting and empowering the LGBTQ community, and creating an inclusive space at all of their shows—a spirit of solidarity that deeply informed the songwriting on Until My Lungs Are Cleared. “We’ve had a lot of people come up to us and tell us how our songs have helped them feel more comfortable with being themselves, which is a really great feeling,” says Harmonie. “I know that I personally go to music to feel like someone else understands what I’m feeling, and that it definitely relieves my anxiety. So if our music can make other people feel better and a little less alone, that would be the best reward.”
Facebook
Back to Writers List