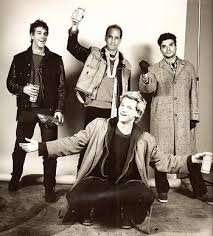 Bursting out of the San Francisco punk scene in 1979, legendary punk band Flipper quickly gained notoriety for their heavy-sludge, languorous sound that separated them from their hardcore peers’ maniacally speedy pace. Known as an early precedent to grunge, the band has been cited as an influence by bands from Nirvana to the Melvins. Kurt Cobain was known for wearing a handmade T-shirt bearing Flipper’s infamous dead fish logo.

Flipper’s early single, “Sex Bomb,” gained them attention for its slowly plodding rhythm, slide whistles and a lyric sheet that’s exactly seven words long. This soon led to the recording of their debut album, Generic Flipper, which brought the band both immeidate and lasting acclaim, which continues to this day. Rolling Stone ranked Generic Flipper as 26th on their list “40 Greatest Punk Albums of All Time.” Pitchfork listed it at no. 193 on their “200 Best Albums of the 1980s.”

The band released their second album, Gone Fishin’, and a series of live albums until they were derailed in 1987 by the death of Will Shatter, one of their two lead singers and bassist. The band members played in various other projects until mega-fan Rick Rubin convinced them to reunite for 1992’s American Grafishy, with Nirvana’s Krist Novoselic replacing Shatter on bass.

Flipper is celebrating their 40th anniversary this year with a worldwide tour featuring David Yow on vocals, beginning in Los Angeles in April.