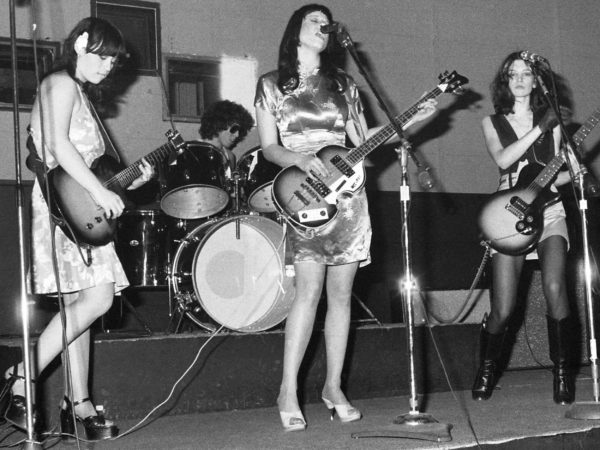 Backstage Pass was a mostly-female American punk-pop band from Los Angeles. The band was formed in 1976, and is known as one of the city’s earliest punk bands. They are also recognized for helping to build and launch Hollywood’s most iconic punk venue, The Masque.

Marina Del Rey (Marina Muhlfriedel) started the band on a whim with bassist Joanna Spock Dean. Before they ever played a note, Backstage Pass was announced in Britain’s “Melody Maker” and “Sounds” music newspapers, and in Rodney Bingenheimer’s “Phonograph Record Magazine” column. Genny Body (Genny Schorr), Ché Zuro, and Barrakuda Majors (Holly Beth Vincent) were other key members of the group. There were several incarnations of the band, all comprised of female musicians, except for an assortment of male drummers. Drummer Rod “The Perve” Mitchell played with Backstage Pass longer than any other drummer. Mike Ruiz from Milk n’ Cookies also performed in various lineups.

The band spent its first months rehearsing at Cherokee Studios in a room with a one-way mirror, through which Alice Cooper, David Bowie and others would watch them try to figure out their instruments. Their relationship to Stiff Records founder Jake Riviera, Elvis Costello, and British punk band The Damned coaxed them out of the rehearsal room and onto the stage. They played extensively in Southern and Northern California on bills with Devo, The Mumps, Wall of Voodoo, The Nuns, Elvis Costello (opening his first US tour!), The Screamers, The Weirdos and others. Backstage Pass was often featured in seminal punk publications including “Backdoor Man,” “Slash Magazine,” “Flipside” and others, photographed by notable rock photographers including Jenny Lens, Brad Elterman, Donna Santisi and James Stark.

The band’s song ‘Legend (Come on Up to Me)’ appears on the Rhino Records punk anthology “Saturday Night Pogo,” and was covered by Redd Kross in the cult movie “Desperate Teenage Lovedolls” with Spock singing lead.

Backstage Pass dissolved in 1979. Marina Del Rey formed Vivabeat, which was signed by Peter Gabriel to Charisma Records. Holly Vincent created Holly and The Italians and had a hit record with ‘Tell That Girl to Shut Up.’ Ché’ Zuro became part of The Orchids which was formed by Kim Fowley.Genny Schorr had been a contender to join the Runaways before joining Backstage Pass and later turned down a role in The Go-Go’s. She instead went on to be in the original lineup of cow-punk band The Screamin’ Sirens with Pleasant Gehman. Spock later played with a number of local bands, as bass player and percussionist. Marina, Genny, and Spock continue to be interviewed about the early punk era in Los Angeles.