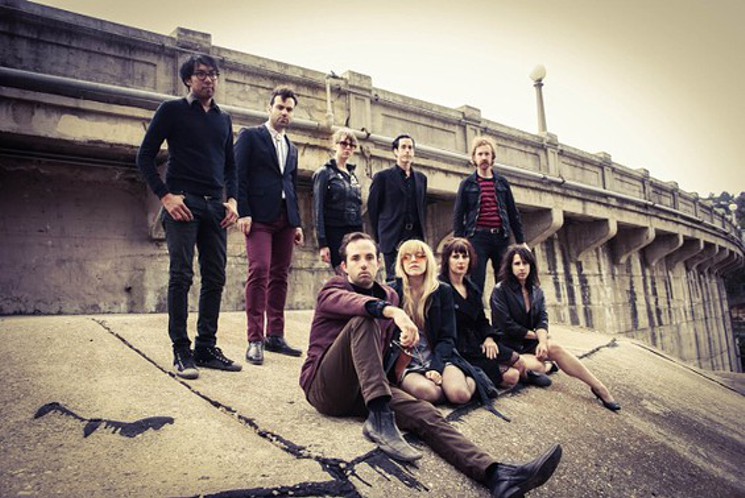 “My number one [album of 2013] was L.A. hard-charging rockers Jail Weddings’ Meltdown: A Declaration of Unpopular Emotion, which is even better than that album name makes it sound. Neither this effortlessly tuneful group, which makes psychedelic/soul/garage pop, nor this work, has gotten much attention, but that needs to change. The general mood on Meltdown is Nick Cave doom and gloom, but it’s somehow still a romp, the kind of thing that makes for a fun Friday night, rocking and crying. If it were the ’40s and I wore a hat, I would take it off to frontman Gabriel Hart.” – Ben Westhoff, LA Weekly

Nine-piece Los Angeles collective Jail Weddings sound like the flailing emotional implosion borne of a triumvirate of frayed nerves, volatile substances and excessive external pressure. But, there’s also a newfound sense of musical genres and histories mixing together like molten wax where the band’s signature Shangri-La’s, Bad Seeds, noir-hued pop merges with hazy psychedelia, bombastic rock and even essences of bizarre Eastern European folk. It’s the sound of a band that’s always been at the brink of self-destruction actually growing and thriving on its own chaotic impulses.